Trish has been running around the area since before she was in high school. She competed for Viz and WashU. Now she is currently ramping back up from an injury this winter.

Trish Frisella
Glendale, MO
Original Hometown: Creve Coeur, MO
Favorite Running Shoe: Asics Cumulus
Favorite Race distance: 5K
Favorite PR: It was a while back but 17:18 in the 5K to qualify for 2006 D3 NCAAs at the North Central last chance meet. At last chance meets, we always raced at night, under the lights when the wind died down which seemed to make things really exciting and intense.

Q: Can you give us a little background on your running history. What got you first involved in the sport?

Frisella: I started running as part of my triathlon training in 7th grade. My dad was doing triathlons so I decided to do a few shorter distance triathlons. I made my own training schedule and got really into it, but my parents had one rule- I wasn’t allowed to run two days in a row. They were scared I’d get injured. That rule luckily changed come freshmen year of high school when I started running XC for Viz.

Q: More recently you’ve been dealing with an injury and getting back into running. Injuries are not unusual to our sport. How did you first diagnosis your injury. Did you know you were hurt right away, did you see a doctor, etc?

Frisella: In an effort to add strength training to my routine, I started doing some high intensity interval training. I had a really great track session (Vo2 Max 800s) and the next morning proceeded to do far too many jump squats. On jump squat #60, I threw out my back. I knew immediately I was injured because I could not stand strait without pain. I had thrown my back out before after a 90 mile bike ride, so didn’t need to see a doctor to know it was just a muscular strain from overuse. I was horizontal for 3 straight days with muscle relaxers. When I was able to move, I foam rolled and used a tennis ball to get the knots out of my glutes. I immediately felt my lower back loosen and have started adding foam rolling into my routine.

Q: Are there any other types of specific rehab you have been doing for the injury? Have you been cross training?

Frisella: Foam rolling and yoga have become staples for me and I’ve been avoiding jump squats like the plague! I’ve also started doing more low impact training (pilates, barre classes, daily method) for injury prevention and to strengthen my core.

Q: How would you characterize your build up back into running and training: aggressive, cautious, somewhere in between?

Frisella: I’ve been cautious in my mileage build up. I don’t see the need to rush things and deal with a reoccurring injury. I’d rather build up slowly so I can successfully train for my next race without having to deal with being sidelined again. I’m up to 8 miles pain free for a long run and will continue to build from there.

Q: One of the tougher part of having an injury in staying mentally engaged. What do you do that helps keep you from going stir crazy without running during an injury?

Frisella: It is very difficult to avoid going stir crazy without running! Running is a major stress reliever for me after a busy workday. To stay mentally engaged, I focus on injury prevention by doing core strengthening, yoga, barre classes, pool running, etc. It’s not the same, but it helps!

Q: Kyle Merber wrote a blog post about how getting injured can be the best thing for someone’s training (Here’s some terrible advice) because it’s forced rest (that most runners don’t give themselves enough of) and you realize how much you miss the sport and want to get back to running. Kind of an absence makes the heart grow fonder type of scenario. After going through an injury, do you think that’s true.

Frisella: Definitely! I feel this time off due to injury has left me mentally prepared and physically strong for my next cycle of training. In college, our coach at Wash U (Jeff Stiles), would have us take 2 weeks off after XC and track season. At the end of that downtime, I was always eager to get back to training as I am now. 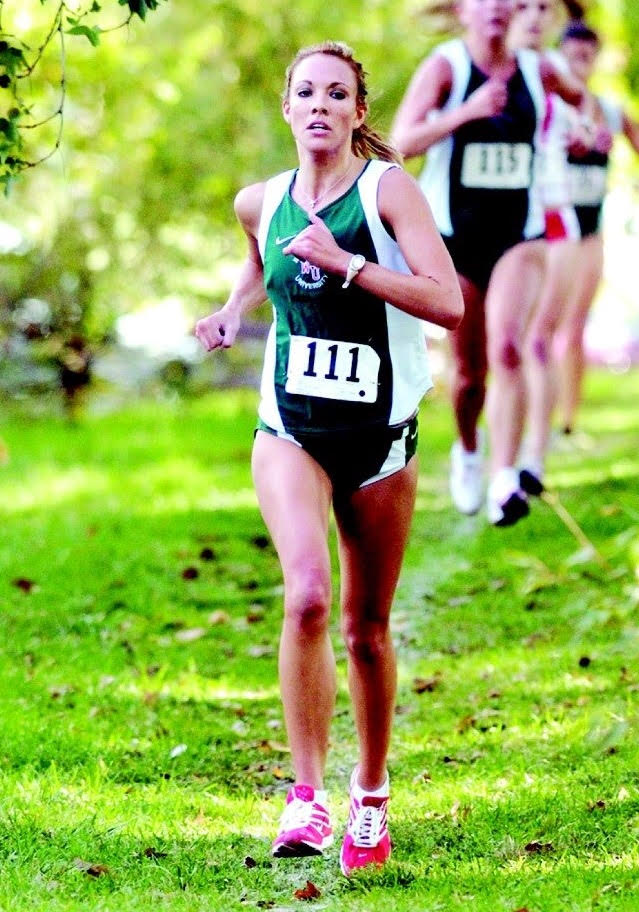 Q: Ok, enough about injuries. You’re getting back into training. What races are you preparing for and what are your goals for those races?

Frisella: My “A” race will be the Christie Clinic Illinois half marathon in Champaign, IL. I’m hoping for a PR on the fast, flat course (sub 1:28). I’ll do some 10Ks and 5Ks as “B” races during training to ramp up for the half.

Q: What are one or two of your favorite workouts that you are looking forward to running this training segment?

Frisella: I am a huge fan of the “Oregon Drill” alternating between a hard 200 and a moderate 200 continuous on the track. Prefontaine used to do it in 30/40 until failure. I don’t hit those times of course! I’ll do 5 miles of the OR drill in lieu of a tempo run at 44/54 +/- a few seconds. Also, VO2 Max 800s, mile repeats,…really any workout on the track. 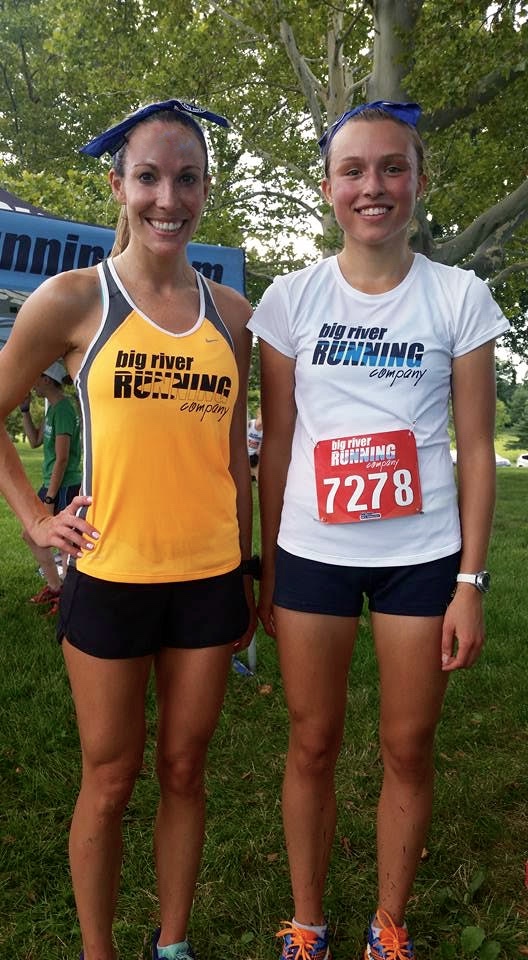 Q: How has training with Big River Racing helped you towards your running goals?

Frisella: Before I was injured, running early AM workouts with the BR team helped me stay focused and consistent in order to improve my times. Running with people is 10 times easier than going it alone. Even if you aren’t running together, having other people out on the track or the roads with you makes it much more enjoyable!

Q: And we’ll end with a fun one. If you could pick three other athletes (any sport allowed) to fill out a 4×400 relay team with you as the anchor leg. Who would they be and why?

Frisella: Sanya Richards-Ross and Allyson Felix would be legs one and two since they are two of the fastest American women in the 400M. It would be so amazing to warm up and cool down next to such physical specimens and talk to them about their training. Next would be Caitlin Jenner (formerly Bruce Jenner) because, let’s be honest, this 4×400 is not going to win any medals if I’m anchoring, but we could at least get some publicity if we had her on the team. Our alternate would be Nick Symmonds (2 time Olympian) because he’s really fast and really good looking. 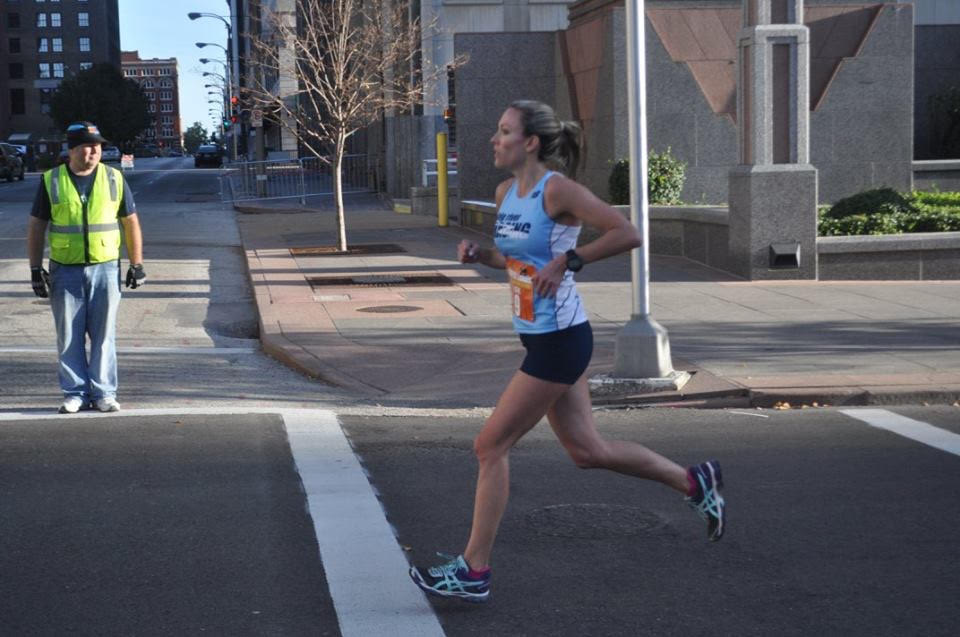